Ménta draws inspiration from the concept of democracy, one of Miton Cucine’s key values, that is translated in our enduring desire to make our design proposal accessible to everyone.

It was born under the sign of variety and versatility, just as mint, of which there are about 600 species in the wild.

The selection of different materials and finishes is incredibly wide, countless are the color variants available for grooves and handles which give life to highly customizable compositions and satisfy, in this way, every aesthetic taste.

At the root of all the possible combinations of Ménta Collection, there is a single thread: giving the kitchen the chance to appear in all its beauty through the refined play of openness of Waind systems.

Ménta_01: an open kitchen island with a strong personality.

Ménta_01 is a kitchen which has an island of great aesthetic impact made with Laminate Oriental stone. The frontals, the sides, and the worktop are all covered by the same former material.

The doors are provided with Fuga handles, long matt black sections which cover the upper part of the doors, giving rise to a niche that serves as a comfortable grip.

The case back, which is the part behind Ménta_01 opening systems, presents instead, the same finish of the frontals.

The volume of the wide central monolithic block is interrupted by a countertop which slopes to embrace a convivial area.

The table with its sandwich plane and leg has a strong appeal.

A characteristic shadow cone is created thanks to this solution, which provides for the conjunction of two panels through a third central, hollow and dark-colored one.

This detail not only is aesthetic, but it also encloses a specific function: lightening the heaviness of a particularly high frontal board.

Waind system: under the banner of personalization and projection towards the living area

In Miton Cucine’s Ménta_01, the columns, made in bilaminate Rovere mogano wood, are enriched by the innovative Waind system.

It is about a combination of spaces, which has been created to answer to the growing demands of costumers looking for new areas in the kitchen environment.

In this model, two Waind typologies can be mixed: Waind K and Waind L.

In the central module there is Waind K, in bilaminate Rovere mogano wood, which is composed of a “space” column, designed to eliminate the clutter in the kitchen.

In this space, indeed, it is possible to place all those small household appliances which are not habitually used during food preparation, thus preventing them from a chaotic accumulation on the worktop.

In the lateral modules instead, there is Waind L, a multifunctional piece of furniture, which can be used both as a library and as a cupboard.

It consists of a set of shelves, in bilaminate Rovere mogano wood, closed by a Bellevue glass door with a frame in fume glass and matt black aluminum.

Both Waind systems are conceived to be customized through extra panels, available in countless tonality, which give a touch of color and unicity to Ménta_01.

The back panels instead are in black or dove-grey fabric.

In both Miton Cucine’s modular projects there are characteristic black junctions, made to connect elements thus creating games of solid and void, to enhance sides’ strength and force, and to smooth the connecting points.

Moreover, Waind systems are equipped with a high profile protection: a profile in black aluminum, which covers the front edge with all the horizontal components.

In the open compartments is possible to integrate LED “duplex” which give a backsplash effect, illuminating both the shelves’ upper and lower part.

Modular projects can also be considered as a trait d’union with the living area for a complete fusion of the two environments in a harmonic spatial continuum.

The living area in its lower part is composed of bases of high storage capacity, which conform to the materials of the open compartments.

In the upper part instead, on the left, there are Waind open modules, whereas on the right there is Waind L, provided with Bellevue windows and Linear handles disposed vertically.

For further information about finishes and technical features, visit the section dedicated to Ménta _01. 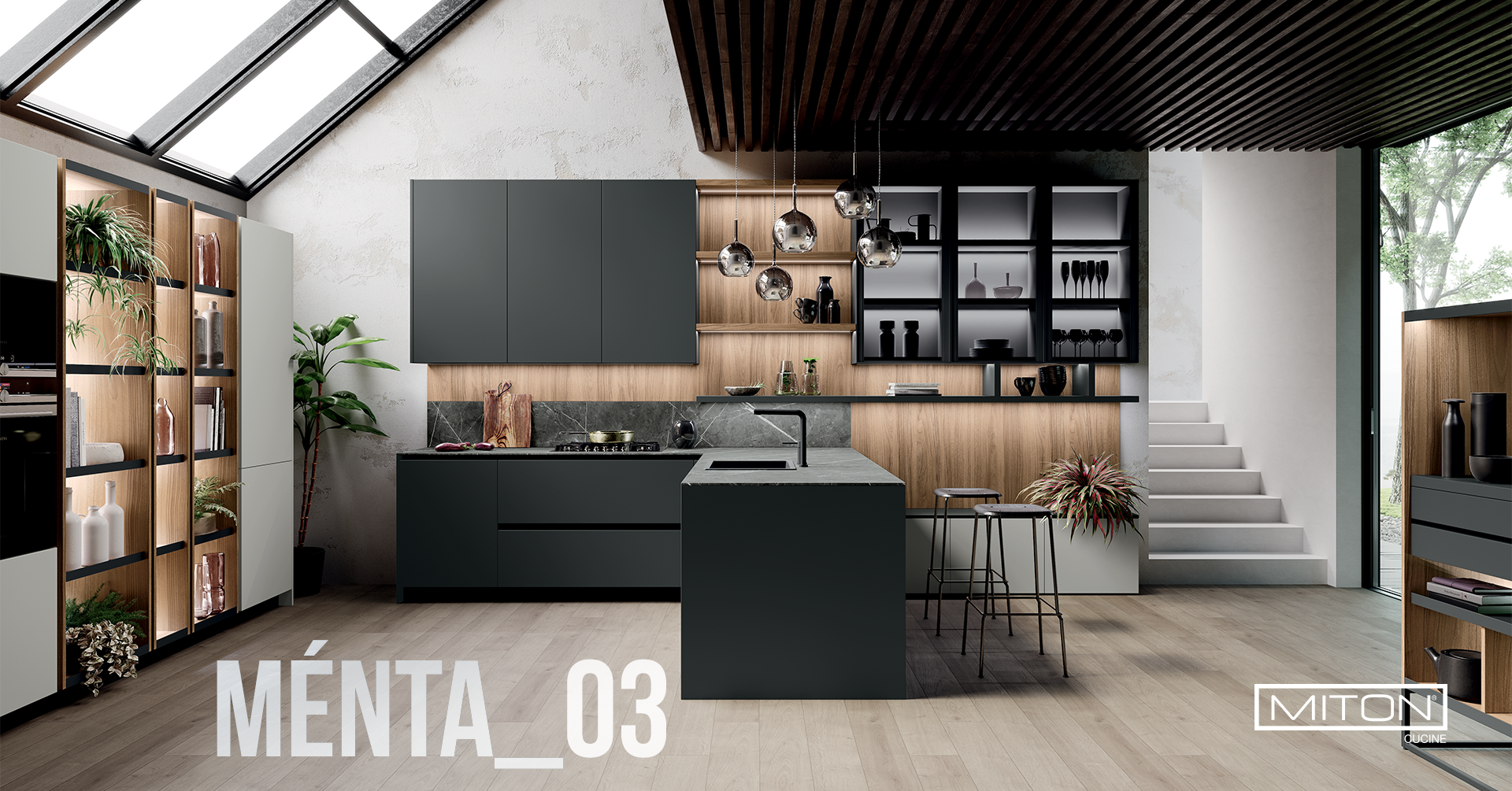 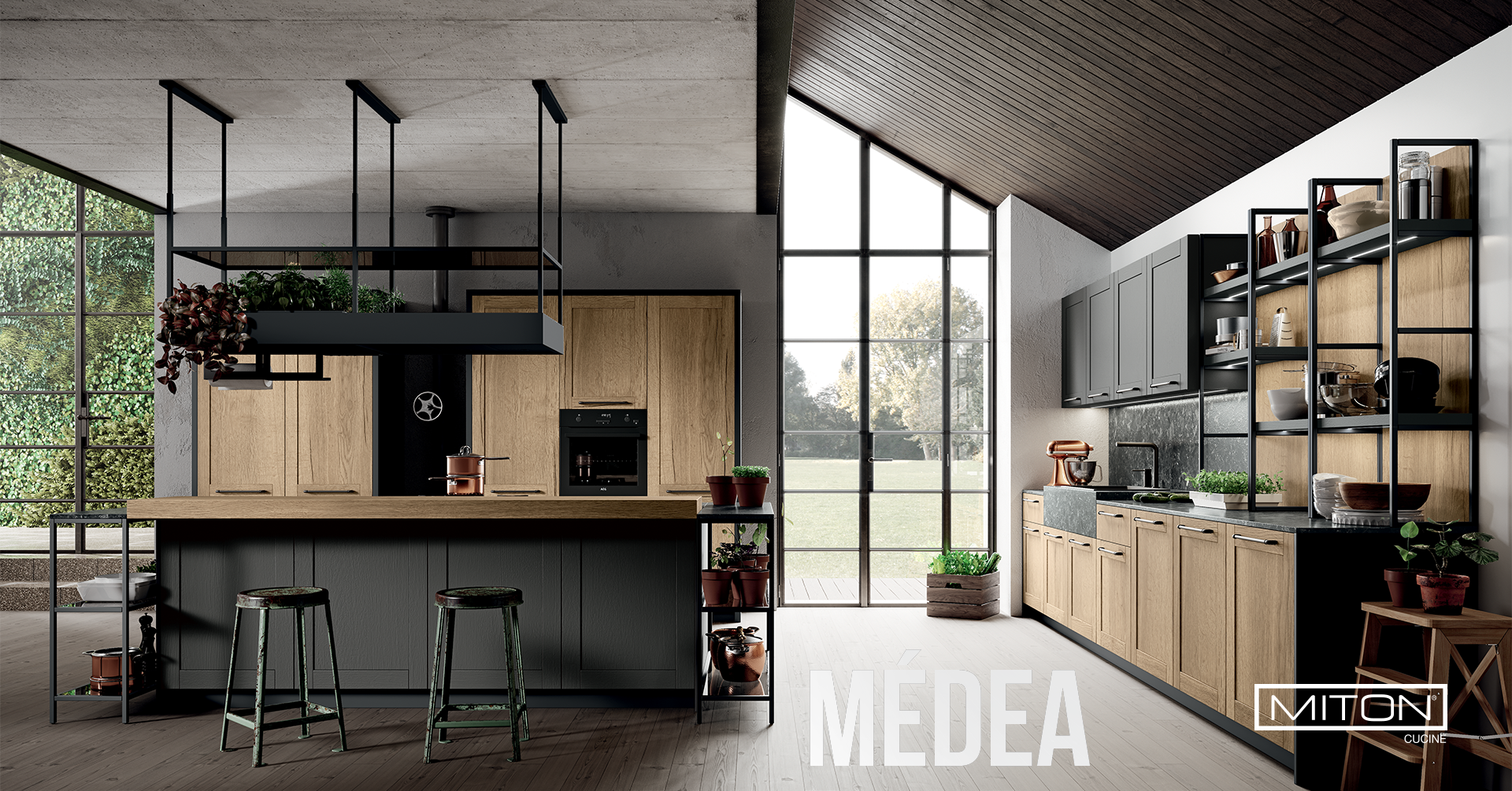 MÉDEA: METROPOLITAN VIBES IN THE KITCHEN 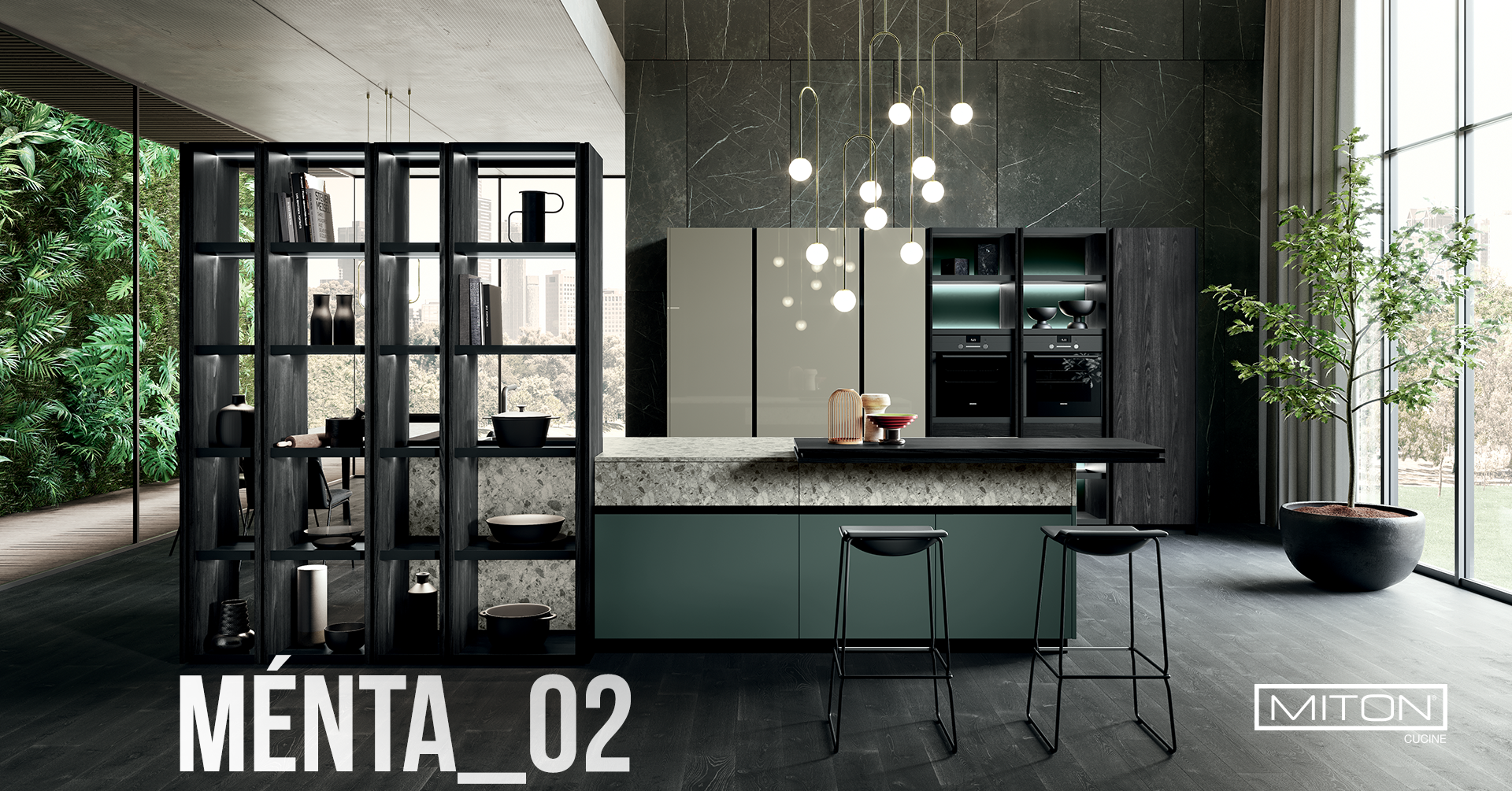 AMARI: A RHYTHMIC SUCCESSION OF SOLIDS AND VOIDS IN A SHARING SPACE