Cubo Design has always been particularly attentive to environmental protection.

With its new factory and through Made In, the innovative production method developed by our firm, the company has decided to strengthen its effort in the respect for the environment.

Three projects with a high sustainability rate have therefore been conceived: a trigeneration plant, a green mobility experiment, and the use of water paints, of which we will further talk about in this article.

“Cubo Design has two priorities: the wellness and the satisfaction of our workers and of people who choose our products”, that is how Giuseppe Arangiaro, head of manufacturing in his family company, has justified the adoption of water paints to substitute solvent-based ones, which have a high degree of toxicity.

“For this challenge, we chose ICA group as our partner, since we share the same values: the research of innovative solutions which combines the highest qualitative and environmental standard”.

Which are the differences between water paints and solvent-based ones?

Cubo design only employs water paints, this means using water as a diluting agent, to which is added a very small quantity of solvent, between 2% and 3%.

The Traditional coating has instead a concentration of solvent around 30 and 90%.

The diluent, present in every compound, has the aim of reducing the paint’s viscosity to permit the proper application and coat.

It evaporates during the drying process, allowing the formation of a protective and adherent layer on the surfaces.

In this phase, thanks to the traditional products there is the release of COV, also known as VOC, Volatile Organic Compounds, which are considered one of the main indoor sources of pollution, by the Ministry of Health.

The usage of water paints has drastically reduced these emissions thanks to a very limited amount of substances harmful to health and to the environment, which have been replaced with water vapor. 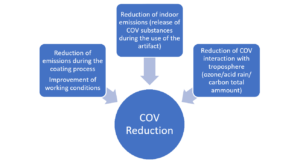 The results of recent tests prove that, for what concerns the transparent cycle, the water painting used by Cubo design permits a 90% VOC reduction compared to any similar procedures carried out with solvent-based ccoating.

Lastly, the doors are treated with UV lamps which end the process and give doors an increased surface hardness.

1 They use water as a diluting agent, and they contain a small percentage of solvent (2-3%);

2 They have been rewarded by the European Union with LIFE recognition, for their low environmental impact;

3 They have been included in A+ class, the lowest one for the release of harmful chemicals called COV;

4 They permit COV reduction of up to 90% in the coating phase, compared to the similar cycle with solvent-based varnish;

5 They are odorless and suited for the domestic environment and healthy working.

What is NOT inside our paints?

Cubo design uses paints that are free from:

Moreover, they comply with the limits of the migration of metals according to the norm EN71-3:2018 that regulates the toy safety.

Cubo Design water-based paints have received a prestigious recognition from the European Union, in the context of a program called LIFE, developed to reward projects for environmental protection.

Why do our water paints have A+ tag?

Since our company has always been committed to ensuring working spaces and kitchen areas that do not cause any health damage to our workers and clients, it only uses products that are subject to strict checks made by ICA group laboratory.

The paints used by our firm, as the result of their reduced content of volatile organic compounds, are classified as A+, that is to say, that they belong to the lowest class of VOC release, according to the French decree n.321 of 2011.

What distinguishes water-based paints from solvent-based ones?

Water paints can be easily recognized during the coating phase because they are free from the annoying and of remarkable intensity smell, which lead the painting process with traditional solvent-based varnish.

Moreover, they are non-flammable and generally equipped with a major elasticity of the dried surface film. There is no aesthetic difference between the two types of paints.

What does affect the durability of painted products?

Furniture has to deal with countless daily challenges in the kitchen environment. Cubo design water paints are subject to specific tests to verify the resistance to heat, humidity, thermal shock, light, scratches, hit, abrasions, spots and so on.

In terms of performance, our products guarantee a greater degree of color stability, which do not change over time, compared to painted surfaces with traditional coating, that have instead the tendency to yellow after the light exposure.

Cubo design can ensure its customers, high-quality furnishings which last over time and are resistant to stress, also thanks to the adoption of water-based paints.

« QUALITY IS MEETING AND EXCEEDING THE CUSTOMERS NEEDS

AND EXPECTATIONS AND THEN CONTINUING TO IMPROVE. »